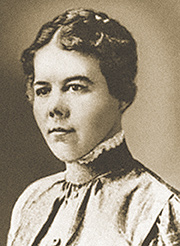 The Lyda Conley Series on Trailblazing Indigenous Futures honors Eliza “Lyda” Burton Conley (c. 1868-1946), who spent much of her life carving new pathways in order to protect her Wyandot community and ancestors in Kansas. Conley pursued a law degree and became the first Native American woman to argue a case in front of the U.S. Supreme Court in order to prevent the sale and upending of the Huron Cemetery in Kansas City, Kansas. Lyda Conley and her sisters, Helena and Ida, also physically protected the cemetery with their bodies, building a shack in the cemetery that they occupied for years to provide round-the-clock defense. Conley was a trailblazer for countless other women and Indigenous Americans who came after her, especially in the world of law. Using Lyda Conley’s life and work as a framework, this series features Indigenous trailblazers of the past, present, and future and promotes new scholarship within Native American and Indigenous studies that intersects with, but is not limited to: sovereignty, education, law, gender, as well as literature, culture, activism, and public history.

Farina King (Diné) is the Horizon Chair in Native American Ecology and Culture and Associate Professor of Native American Studies at the University of Oklahoma. Previously, between 2016 and 2022, she was an associate professor of History at Northeastern State University, Tahlequah. She was also an affiliate of the Cherokee and Indigenous Studies Department and the Director of the NSU Center for Indigenous Community Engagement. She is the President of the Southwest Oral History Association (2021-2022) and author of The Earth Memory Compass: Diné Landscapes and Education in the Twentieth Century.

Kiara M. Vigil (Dakota/Apache) is an associate professor of American Studies at Amherst College, where she specializes in teaching and research related to Native American history, literature, and culture. She is in her third year on Council for the Native American and Indigenous Studies Association (NAISA) and the Editor for the journal SAIL — Studies in American Indian Literatures, published by the University of Nebraska Press. Vigil is the author of Indigenous Intellectuals: Sovereignty, Citizenship, and the American Imagination, 1880–1930.

Tai S. Edwards is an associate professor of history at Johnson County Community College in Overland Park, KS where she also serves as the Kansas Studies Institute director. Edwards is an award-winning teacher, focused on U.S., Indigenous peoples, Kansas, and Popular Culture history, with special emphasis on interdisciplinary coteaching that merges history with economics and political science. She also serves as an officer in the Kansas Association for Native American Education (KANAE) and the Kansas Association of Historians (KAH). Edwards is the author of Osage Women and Empire: Gender and Power.

You can find out more about which cookies we are using or switch them off in settings.

This website uses cookies so that we can provide you with the best user experience possible. Cookie information is stored in your browser and performs functions such as recognising you when you return to our website and helping our team to understand which sections of the website you find most interesting and useful.

Strictly Necessary Cookie should be enabled at all times so that we can save your preferences for cookie settings.

If you disable this cookie, we will not be able to save your preferences. This means that every time you visit this website you will need to enable or disable cookies again.